22:00
A pre-flight briefing is held for crew members.

01:58
The two weather planes, Enola Gay and Laggin' Dragon, take off for their selected cities.

02:47
Bockscar lifts off from Tinian Island.

03:00
The weaponeer on Bockscar switches out the safety plugs.

08:50
Bockscar heads in the direction of the target city.

SECOND PLANET
A Place Without a Catastrophe 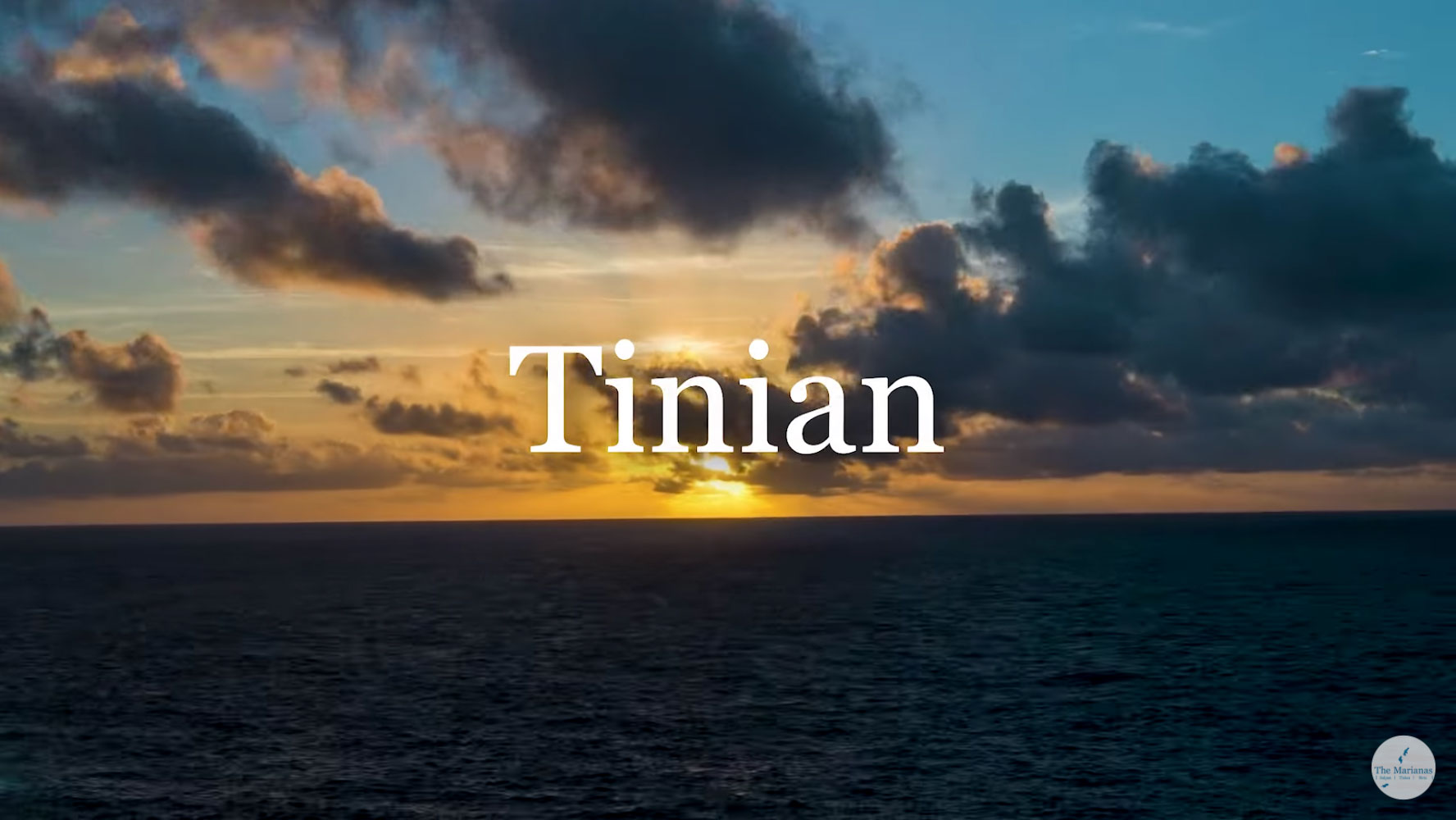 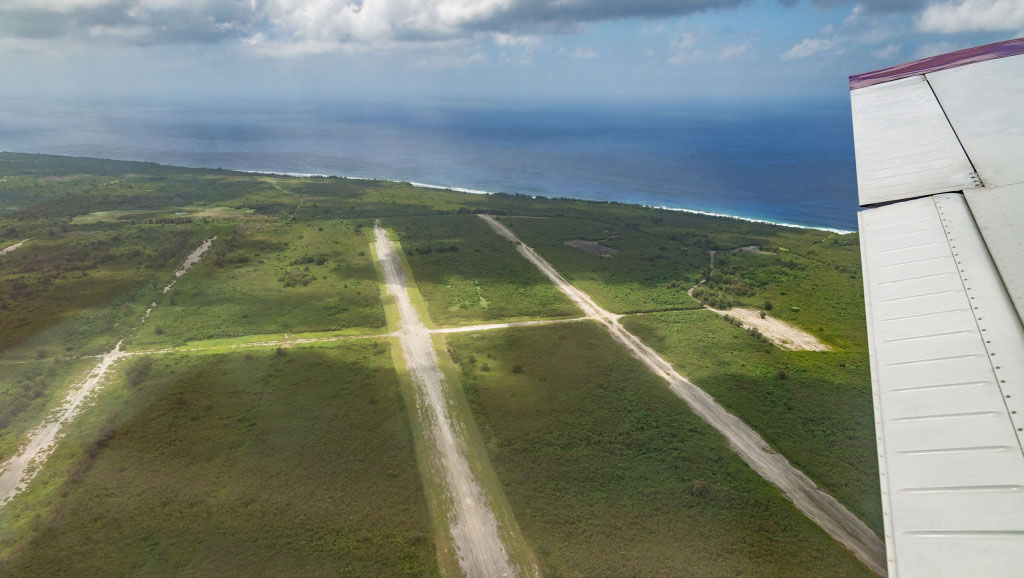 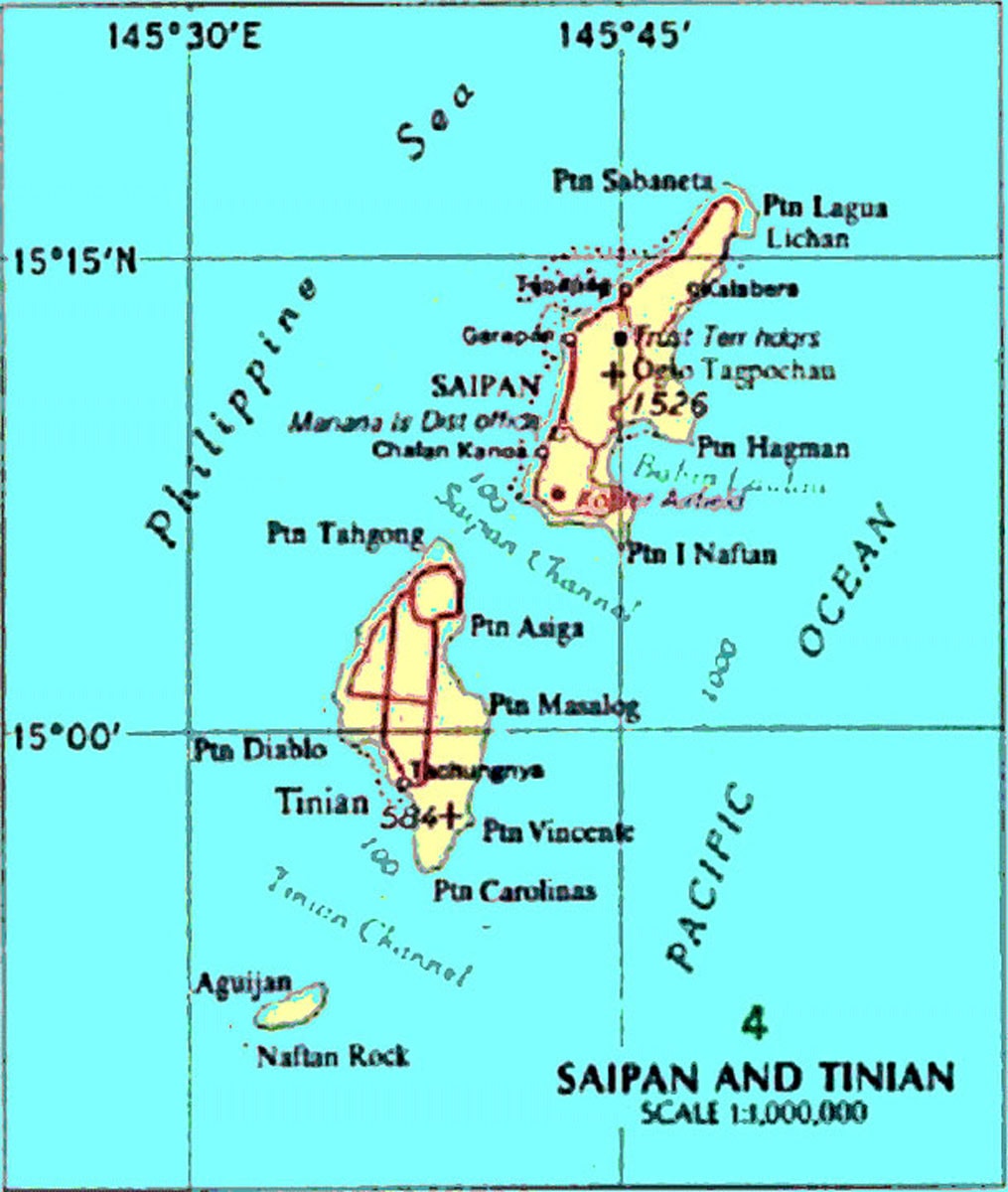 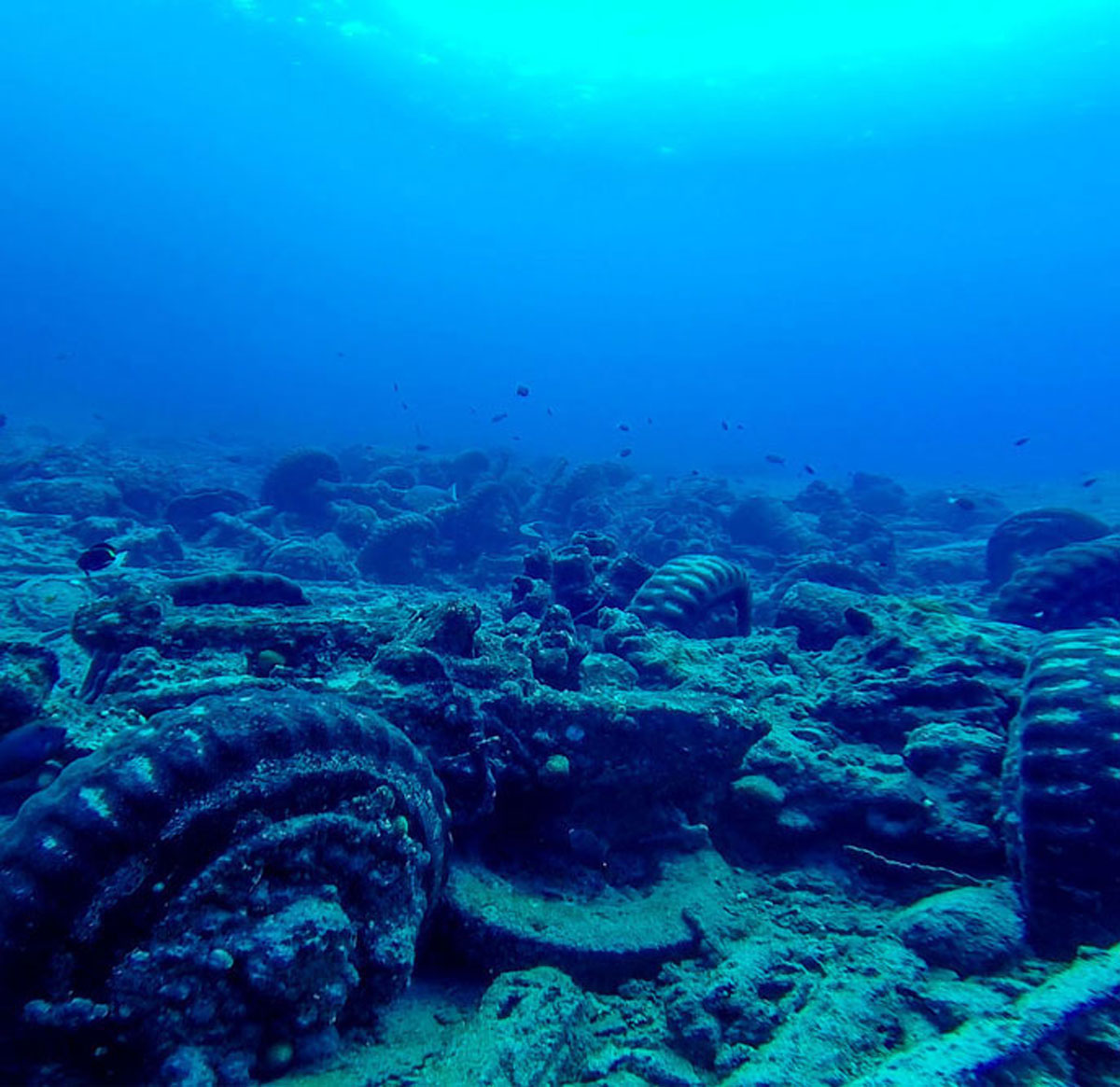 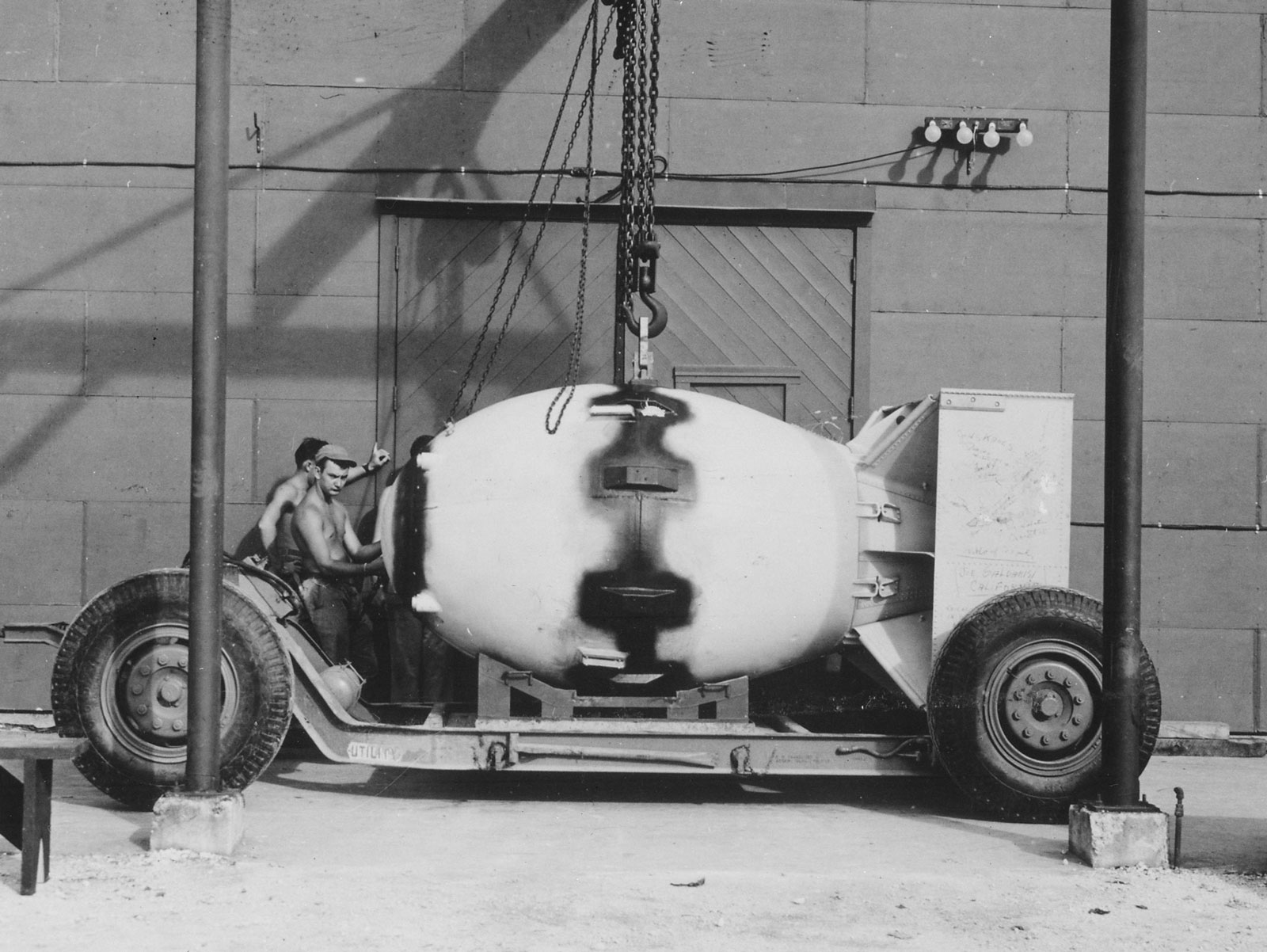 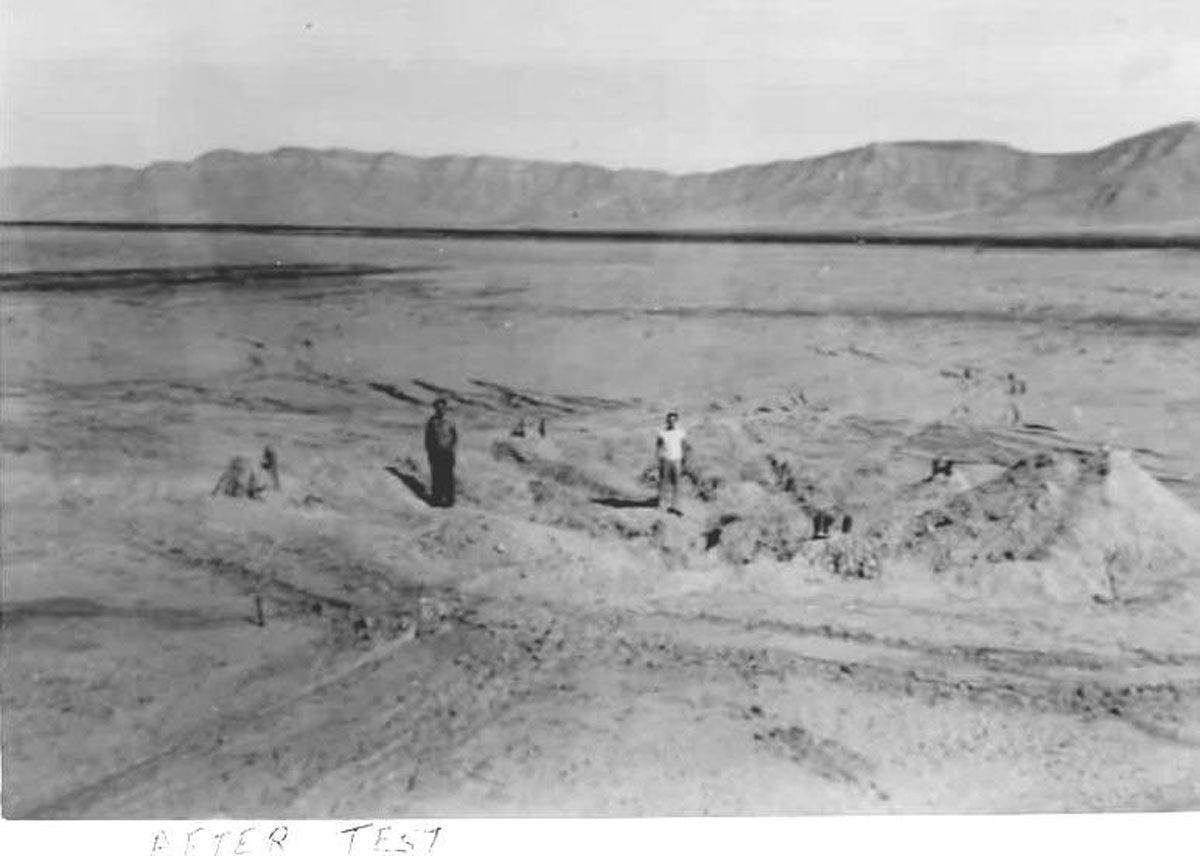 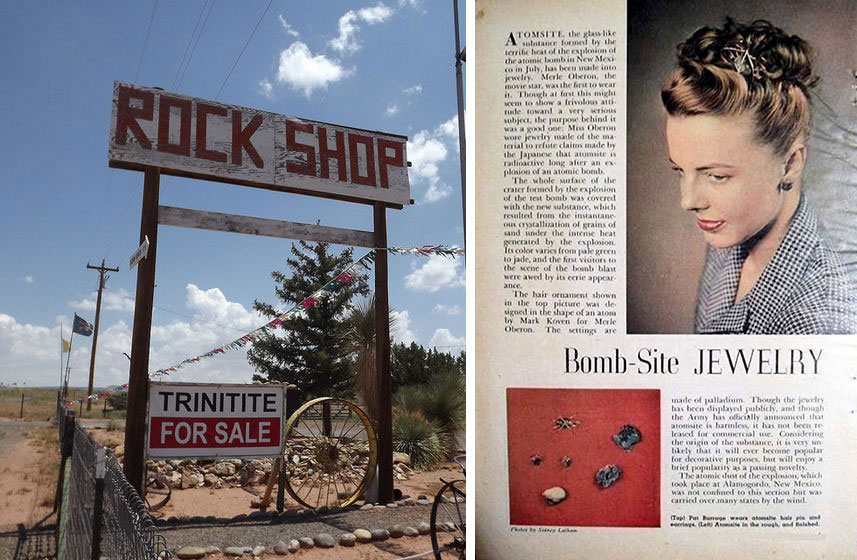 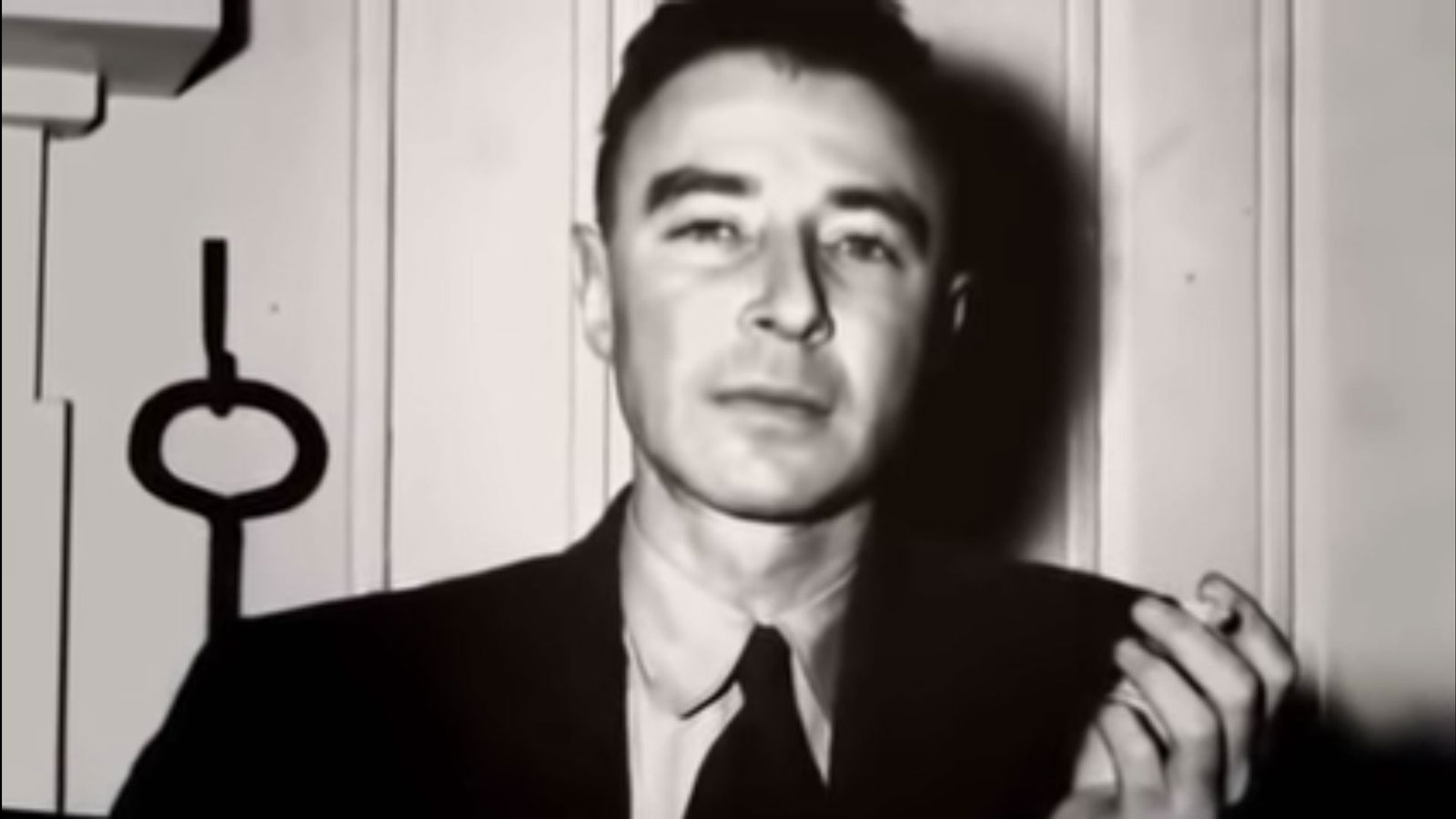 Tinian island is located about 5km southeast of Saipan.
It takes only 15 minutes in small airplane. Tinian has the population of approximately 3,000 on the 101.8km2 land and is the second largest island next to Saipan in the Northern Mariana islands.

Freedom Airline runs 13 services a day between Saipan and Tinian.
Since it only takes 15 minutes, Tinian is convenient for a day trip from Saipan.
Tinian is a beautiful island covered with green nature and has lots of diving spots.
In addition to the most famous Tinian Grotto, you can enjoy ruined battleplanes and tanks under the water at so-called Dump Cove.

Rent-a-car is convenient to travel on the island. You can visit the ruins of indigenous Chamorro villages as well as the ruined shrines built during the Japanese occupation. After a great day in Tinian, let’s go back to Saipan using the late afternoon flight. When the airplane departs the island, you will notice four old runways that have been mostly covered by the jungles. From the runway on the north edge, B29 Bockscar departed at 2:47AM on August 9, 1945.

Uranium exists in nature. So, making uranium bomb requires excavating and purify uranium to take out uranium 235. In contrast, plutonium can be produced artificially and is easier to fission than uranium 235, which reduces the necessary amount to 1/3 of the uranium. The amount of plutonium Bockscar was carrying on August 9 was 6.2kg.

Let’s visit some places relating to the research and manufacturing of the atomic bomb. This is Los Alamos National Laboratory in New Mexico. Here, scientists including Robert Oppenheimer conducted the planning and manufacturing of the atomic bomb. And the Hanford Site in Washington State is where plutonium was extracted. Between 1943 and 1945, 3 nuclear reactors and plutonium processing facilities were built.

The Hanford Site grew further during the Cold War era with 50,000 people living here at its peak. Fatman loaded on Bockscar on August 8 used plutonium produced in the B reactor at Hanford Site. Plutonium bomb with extracted plutonium from Hanford Site was tested in the desert, which was then called the USAAF Alamogordo Bombing and Gunnery Range. This test is the famous Trinity nuclear test.

Trinity nuclear test was the first detonation of a nuclear weapon in the United States, which took place on July 16, 1945. Trinity, the code name of the test, is a Christian doctrine. Although the truth behind this naming is unknown, it is said that Oppenheimer took a word from a poetry piece that her girlfriend introduced to him. His girlfriend, Jean Tatlock, committed suicide about a year and half before the Trinity test. However, the real cause of her death considering her membership to the communist party remains in mystery.

In the Trinity test site, the massive blast caused a huge crater. After the test, the glassy residue remained. The glass is primarily composed of arkosic sand composed of quartz grains and feldspar that was melted by the atomic blast. This light green glass object was named, Trinitite.

Trinitite from the test site was then turned into an accessory. In the fall of 1945, a jewelry designer released “piercings” and “broaches” using trinitite. At that time, many models and celebrities enjoyed wearing these accessories.

Currently, the “Nuclear Tour” at the Trinity Site has become a popular tourism product. The site opens only twice a year, on the first Saturday of April and October.

Other tourism spots related to atomic bombs are the Oak Ridge National Laboratory in Tennessee, which are said to be formed overnight, and the Nevada Test Site. Chongqing in China, Kazakhstan, Bikini, Montebello Islands, and the deserts in Australia and West Africa are also open for nuclear related tourism.

In 1945, the cost of developing and manufacturing an atomic bomb was approximately $ 2 billion. About 600,000 people were involved in this project. These include not only scientists, but also city planners and architects who created cities for bomb development, as well as many workers who did not know the details of their work.